Aaron Renier is one of my bestest of buddies. He’s a Wisconsin homeboy raised on brautwurst and fried cheese curds just like me. (Now he eats tofurkey brautwurst). He’s also one talented, brushtastic cartoonist with a great book — Spiralbound. The French edition was released this January on Delcourt’s Shampooing imprint (rodeoed by the brilliant Lewis Trondheim); and Aaron and I flew to AngoulÃªme (Europe’s premier comics festival) to celebrate. I documented some of it in my sketchbook, but then Aaron and my trip drifted separate directions and the diary sort of disintegrated. Oh well, here’s a glimpse of it anyway.

And just for proof, here’s a photo of Aaron’s ‘stache when we first hopped a train from Paris in our grubby jetlagged splendour. The second photo is in Paris along with Alban Rautenstrauch and Alex Holden. The third photo is me getting horrifically ill at Charles Berberian’s place. Charles is one of the most charming human beings in the comics industry and a true inspiration, but I defiled his bathroom in a number of ways with my food poisoning. I couldn’t eat for four days, lost ten pounds, missed my plane back to the states, and was diagnosed upon returning as host to three varieties of parasites! Merci to MylÃ©ne for looking after me. 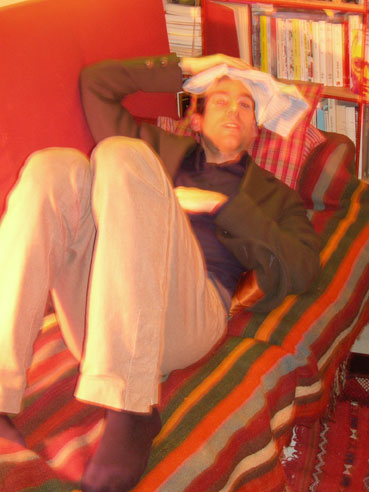 Also, just so Aaron isn’t embarrassed by this advertisement of his ol’ soup-strainer, here’s me rockin’ four of my own.

28 thoughts on “sausages, mustaches, and intestinal worms – oh my!”