Jeff Smith invited me to participate as guest-blogger in a forum discussing the ’90s
self-publishing movement in comics and how it affected me. Here’s what I came up with:

BONE got me reading comics again. In high school, I’d rejected the nerdy obsessions
of my youth (comics, toys, rpgs) and replaced them with skateboarding and girls and
a watered-down rural version of grunge culture. A couple devoted buddies would drag
me to the comics store or lend me this or that; but in four years, BONE was the first book
to capture my attention. That lust brush line, animated timing, and playful interaction between
very real characters! (No need for me to convert readers of Jeff’s blog.) Soon after, I discovered
MADMAN — again the juicy brush line, along with the spiritual musings of an insecure Prometheus.

These books got me READING comics again, but it was a slightly different brand
of self-published comics that inspired me to MAKE my own.

The DIY ethic was infesting my 20 year old life — a scrappy blend of vegetarianism,
punk rock, dumpsterdiving, and disillusion with capitalist society. The “people’s media”
wasn’t books or magazines or the young internet, but zines and minicomics – hand-assembled
during late night Kinko’s sessions when you could bribe an employee for free copies with a six pack.
The drawing aesthetic and subject matter of these comics were most often intimate and raw,
like personal letters from the author. John Porcellino – creator of KING CAT – became our appointed
cult leader, and ran a distribution outfit for mincomics, zines, and seven-inches called SPIT & A HALF;
graciously distributing my own first attempts at comics and introducing me to an entire world of obscure creators.

This is where the Xeric foundation factors in.
I was of a generation that read NINJA TURTLES as a CHILD (even watched the ridiculous
animated version) and then was coming-of-age when Peter Laird began tithing to first-time
self publishers. (Note that the Xeric grant’s 1992 debut was nearly synchronized with Grunge.)

All my favorite mini-comic creators — David Lasky, Adrian Tomine, Megan Kelso, Jon Lewis — were
transitioning to “professional-style” Xeric-funded books. Because the Xeric was a one-time financial gift,
it lent itself to self-contained projects. For me, this is where the notion of “the graphic novel” first became
appealing – a comic book with a complete story – beginning to end – not stretched over years of soap-operatic serialization.

Foremost of these was Tom Hart’s HUTCH OWEN’S WORKING HARD. In only 53 pages, an entire energetic
epic unfurled. Something changed within you while reading it. It definitely inspired my first book CHUNKY RICE.
The grungey knit cap and snargley tooths of Solomon is a deliberate tribute (or rip-off) of dear ol’ Hutch.

The other book that I poured over & over and sought to emulate was Walt Holcombe’s KING of PERSIA.
It’s so poetic and musical and heartbreaking that it moved me to tears. This is what I sought to create
– comics to make you weep! (And I suspect the Orientalist fancies of HABIBI were awakened by Walt’s book.)

Finally, Joe Chiappetta’s SILLY DADDY. His LONG GOOD-BYE was self-published without Xeric aid, but it
did package his mincomics into a 98 page booklet. These confessional diaries and anti-capitalist diatribes
read as direct translations from his heart. The sometimes crude drawing could suddenly betray Joe’s skill
as an attentive life-drawer. This rendering of little Maria still sends shivers through me. 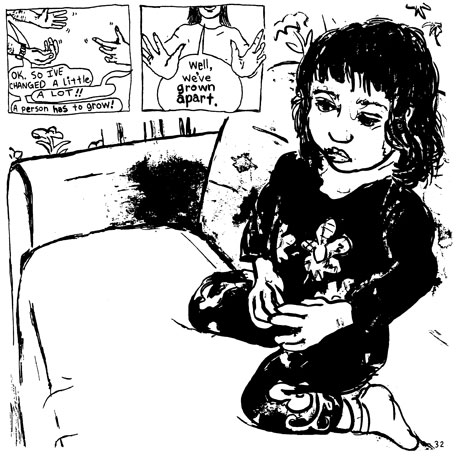 In the 90s, the largest pocket of Xeric cartoonists were living in Seattle, Washington — they replaced
the corporate-opted music scene with their loud & energetic comics scene. Other than heartbreak, they
were what motivated me to leave my Wisconsin home for the great Northwest. At the last moment,
a friend convinced me that Portland, Oregon was the smaller, hipper, organic version of Seattle. 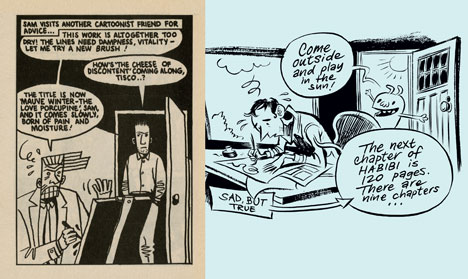 … and I long for the days of of playfulness and community – before the pretention or presumptiousness
of the “graphic novel” — when photocopies were stolen from Kinko’s and lovingly hand-stapled by the author.