“Little Nothings” — that’s the title for a book Maurice Sendak was working on when he died- based on Mozart’s first ballet.
Today is the anniversary of Maurice’s birth 86 years ago.

In the last year of his life, Maurice became an adopted grandfather and we chatted weekly on the phone. I transcribed bits of his conversations, almost all of which are too personal or vulnerable or hilariously vulgar to share here on the blog… but to commemorate his birthday, I found something petit. On July 31, 2011 speaking of his other project left unfinished – “THE NOSE BOOK”, Maurice said,
“I am writing something. A door is opening — moreso a WINDOW is opening. It’s FUNNY. I’ve never written anything funny before. No tragic overtones… just plain silly. But I’m not gonna judge it, or condemn it. … Which is very unlike me.” 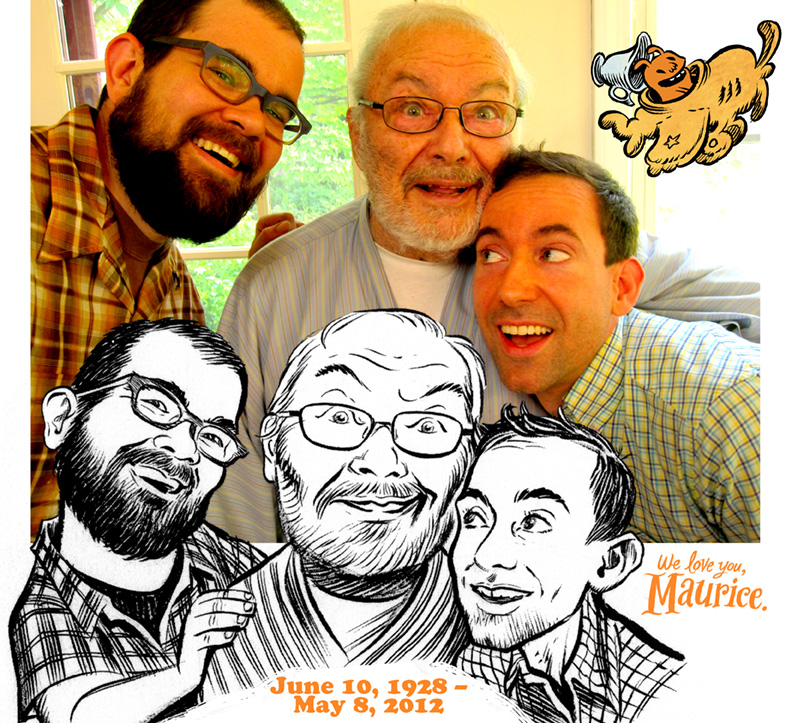 The photo is with my dear cartoonist buddy Aaron Renier who introduced us in 2011.

In a later conversation, Maurice said, “I’ve been feeling fetid in my efforts at writing. Feel as if the creative spirit has departed. It better not leave me or I’ll have a SHIT FIT!” That’s how I was feeling when I left for France – I’m in Paris today – taking a breather from SPACE DUMPLINS to work in a sketchbook outside the studio again.

One more: “You just gotta get old and whatever was unattractive about your work is suddenly all right. Everything becomes silly.”
Still miss him everyday.