A 270-page thumbnail draft of my new all-ages book was completed today. About three months’ work versus two years spent on the thumbnails for HABIBI. For the new project, I scored a new $50 drafting table so that the vintage table HABIBI was drawn on can have company. That’s cartoonist buddy Farel Dalrymple in the photo joining me for a day of drawing.

Also noteworthy is that HABIBI has been honored with two Eisner award nominations! The award’s namesake is the late, great Will Eisner. Check here for the full list of categories and nominees. 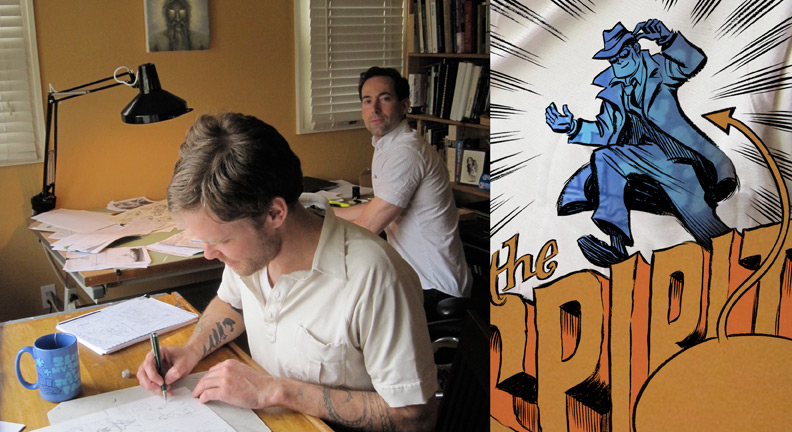 This week, I’ll be at Calvin College in my home-state of Michigan for the Festival of Faith & Writing. This includes an exhibition of original art open to the public on Friday, April 20th at 6:30pm.  The show runs for a week after; M-T 9am-5pm, W-F 9am-9pm, Sat 10am-4pm.

Concerning travel, I’m considering over a dozen invites from all over the world, but the only ones confirmed for now are A) Calvin’s Festival of Faith & Writing, B) the Saló Internacional del Còmic in Barcelona, Spain; May 3-6, and C) the Skirball Cultural Center in LA accompanying their Women Hold Up Half the Sky exhibition; 8pm on May 10th. And I hope to make it to this summer’s San Diego Comic-con!